This Wizard will guide you via simple steps to open a Disk Image that was previously created. You can open a Disk Image based on a configuration file or compose a Disk Image from raw chunks. These chunks may be created by third party software. After a Disk Image is opened you are able to work with it as you would work with a regular Logical Drive or Data Storage Device. You can scan an opened Disk Image, view its contents, and recover files and folders from the Disk Image. 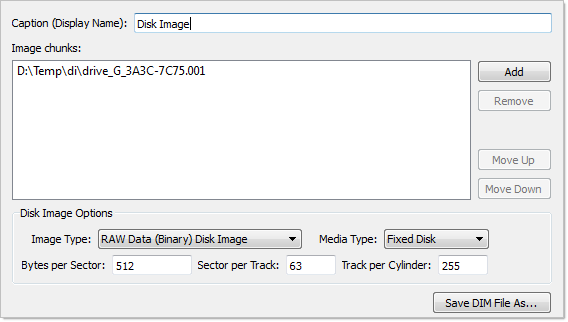 Caption
Enter any label to distinguish newly opened disk image among other devices and disks.
Disk Image Chunks
A Disk Image consists of one or many files, which contains actual image data. A Disk Image can be cut into several files (chunks) during creation for better space allocation. In this list you have to specify all these files which make ups the image. To Add a Disk Image chunk to the list click the Add New button and use browse for a file dialog to select a file. To Remove a Disk Image chunk, select this chunk in the list and click the Remove button. To modify the order of Disk Image chunks, select any chunk you wish to relocate and use the Up and Down buttons to move a selected chunk in the chunk stack.
Image Type
Select image type you about to open. Usually it assigned automatically, depending on Disk Image chunks added.
Media Type
Select appropriate media type. Usually it assign automatically. Use Fixed Disk by default.
Bytes per Sector
Enter sector size in bytes;
Sectors per Track
Enter track size in sectors;
Tracks per Cylinder
Enter cylinder size in tracks;
Save DIM File as...
In case of manual composition of Disk Image properties you may save final configuration file for later use;

Verify and confirm parameters for the disk image to be opened.

A new storage device and one or several drives (if detected) will appear in the list of devices and drives in the Recovery Explorer.

You can work with an opened Disk Image the same way as you work with a regular storage device or logical drive, i.e. scan device for deleted/damaged partitions, scan drives and search for files, recover/copy files and folders to another safe location, etc..